Aim for the Ten Yard Line

The majority of people who attain success in any field have a plan of action. 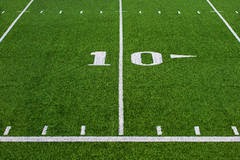 A football player’s goal is to make a touchdown. Even though in the process of getting from the fifty-yard line to the end zone, he encounters falls, blocks, and setbacks, he keeps pressing toward his goal. The time, effort, and frustration are daunting, and because of this the players alleviate the pressure of this seemingly impossible task by aiming for one ten-yard line at a time, while still keeping the end zone in sight. Rare is the runner that sprints the length of the field in one mad-dash.


Losing weight is a lot like making a touchdown. People know the goal (the ideal number on their scale), but they often don’t know the route to reach it, or they give up in frustration after setbacks. The way to reach the goal is by taking small steps in the right direction toward good health. Aim to lose two pounds in one week rather than vaguely saying, “I want to lose thirty pounds.” Two pounds a week is specific and doable, if you make small changes.

I used to make up and recite mantras when I struggled with weight related issues. They helped me begin my steps to success. One of them was: “If I don’t do it now, it won’t get done. It will never get any easier than where I am right now. I will always have to go through this difficult place to get where I want to go."

Steady progress in the right direction will help you reach your goal. Discover ways to lose weight and win the game in I'm Hungry! I'm Bored!
Posted by Carol McCormick at 1:07 PM